Please, can you introduce yourself and tell us more about the sepsis research feature and the history behind the organization?

I’m Colin Graham, COO of Sepsis Research FEAT. Our charity was founded in 2013 by Craig Stupow after he lost his wife, Dr. Fiona Elizabeth Agnew, and their unborn daughter, Isla, to sepsis in August 2012.

original name FEAT-the Fion eElizabeth aGeno TRust- The charity changed its name in 2019 to Sepsis Research FEAT. Our primary goals in funding biomedical research are to understand and treat sepsis and to increase awareness of sepsis among members of the public and medical professionals.

Sepsis research FEAT’s mission is to save lives and improve outcomes in sepsis patients by funding research and raising awareness. How do you do this and what is the end goal?

We are in our 4The tenth Research Partnership with the GenOMICC (Genetics of Mortality in Critical Care) study at the Roslin Institute, University of Edinburgh. Led by Professor Kenneth Bailey, the world-leading GenOMICC project aims to find the genetic factors that determine outcomes in critical disease. Researchers are working to expand their understanding of sepsis and help develop improved treatments by examining DNA samples from patients in intensive care units (ICUs) across the UK. There are millions of differences in DNA sequences between any two people, any of which could be important in determining the outcome in sepsis.

Finding important genes requires the recruitment of large numbers of patients. Typically, researchers order thousands of patient samples to find genetic associations with the disease. They need to recruit over a large area, and for a long time, to obtain the necessary DNA. Early funding from the Sepsis Research FEAT helped establish the sample collection and storage infrastructure, and this enabled the study to grow at a rapid pace.

GenOMICC has been able to collect and store more than 19,000 DNA samples from critically ill patients in intensive care units across the UK and elsewhere, the largest study of its kind anywhere in the world. The goal is to obtain 100,000 genomes for critical diseases, with the ultimate goal of making genetic discoveries that will give unprecedented insight into the biology of critical diseases, including sepsis, helping to identify new treatments and provide better outcomes for sepsis patients.

Another key part of our work is to raise awareness of sepsis so that people recognize the five main symptoms and know to seek urgent medical help if they suspect sepsis. The press and social media are very important in communicating our awareness messages, and the main goal is to tell stories of sepsis through the eyes of the people affected by it. The power of sharing individual stories is undisputed in terms of increasing awareness of sepsis and its symptoms.

We are excited to be able to produce a brand new series of eight podcasts, which we are launching during Sepsis Awareness Month 2022. These new podcasts will tell the stories of those who have been directly affected by sepsis in a new and engaging way. By maximizing the audience we reach, we will educate more people, more powerfully, about sepsis and its symptoms and impact.

Finally this sepsis awareness month we are launching a new national awareness campaign in partnership with the Scottish Government. Sepsis Research FEAT previously worked with the Scottish Government on awareness campaigns in 2018 and 2019, reaching more than 1.3 million people across Scotland. The latter partnership will build on this success with a nationwide multimedia campaign that will include commercial television, radio, print and social media.

Known as the silent killer, sepsis affects approximately 50 million people worldwide each year. Can you explain why the results of sepsis can be so severe if not detected early?

Sepsis occurs when the body’s response to infection quickly gets out of control. Instead of just fighting the infection, the immune system begins attacking the entire body, which can lead to multiple organ failure and death.

When dealing with suspected cases of sepsis, acting quickly and initiating early medical treatment can save lives and improve outcomes. However, recognizing and diagnosing sepsis is not always easy. Sepsis begins with an infection – eg, chest, skin, urine, and meningitis – but in the early stages, symptoms can be vague and difficult even for doctors and nurses to identify.

Five main symptoms of sepsis that patients and the public should be aware of are:

If any of these symptoms get significantly worse, it may indicate sepsis, especially if the person has underlying weaknesses due to age, disease, or altered immune function.

As sepsis worsens, blood flow to vital organs, such as the brain, heart, and kidneys, is impaired.

This can increase the risk of organ failure and tissue death.

Septic shock is the last and most advanced form of sepsis and the most difficult to treat. In septic shock, a significant drop in blood pressure can severely affect the organs and lead to long-term complications or death.

The main message for sepsis is to seek urgent medical attention – prompt diagnosis and treatment will help save lives.

Sepsis affects not only adults, but children as well. How common is childhood sepsis, and how can adults detect these symptoms in children and infants?

There are around 25,000 cases of sepsis in children each year in the UK. Babies and children may have vague and nonspecific symptoms of sepsis, which can make diagnosis difficult, and signs and symptoms can differ slightly from those of adults. In children and infants, parents should look for:

Rapid breathing or shortness of breath. Cool, mottled or pale skin. too high or low temperature; Skin or lips that appear bluish. poor nutrition; vomiting or diarrhea; lethargy or difficulty getting up little or no urine; Non-fading rash.

Above all, parents should trust their instincts and seek urgent medical help if they are at all worried about the health of their children.

Sepsis research FEAT funds research into sepsis through various partners. Can you tell us about some of the most promising breakthroughs that have been discovered through this work?

At the start of the COVID-19 pandemic, the GenOMICC project was identified as an urgent priority public health study by the UK’s National Institute for Health Research. By focusing their research on this new and emerging disease, the team was able to identify 23 genes associated with the most severe form of COVID-19. These findings helped identify and reuse drug treatments for COVID patients, a very important achievement for patient outcomes. Successful research on COVID-19 shows the promise of human genetics in understanding serious diseases and is likely to be extremely important for understanding and treating sepsis.

The Global Sepsis Alliance celebrates World Sepsis Day annually in September. Why do you think it is so important to raise awareness of sepsis and how do global days like this one help achieve this goal?

Random sepsis. It can affect anyone, regardless of age, gender, background, or health status. It seems inconceivable that in 2022 there is still a condition that could kill an otherwise healthy adult or child within hours. That is why it is so important for everyone to know what sepsis is, to be able to recognize the main symptoms, and to understand that it is a medical emergency that requires urgent treatment.

Each September sepsis awareness month, and World Sepsis Day on September 13th, provide an opportunity to highlight sepsis. We join organizations and individuals around the world to remember those who have lost their lives to sepsis and renew our pledge to be part of the global movement to help improve diagnosis and treatment for future sepsis patients.

What’s next for a FEAT search for sepsis? Do you have any exciting projects coming up?

We are excited to announce an increased investment to support a new pilot study, GenOMICC Acute, in which additional blood samples will be obtained from patients soon after their admission to the ICU, providing researchers with insight into what happens inside a patient’s body when they are most critically ill. . It will provide a deeper understanding of patients’ genetics, their response to critical diseases, and may eventually lead to more targeted therapies for patients.

Where can readers get more information?

Colin joined the Sepsis Research FEAT in October 2018 as the charity’s first COO. Colin is a veteran of the charitable sector with 25 years of experience. He is responsible for advising the Board of Trustees, developing awareness of the charity, overseeing fundraising and 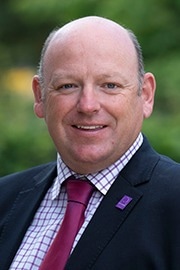